Me toes are itching,
soles are warm and flexing
they are happy once again.

I leave before lights flick on,
stepping out, inhaling
glancing about while toes twitch.

Into the dark morning I toddle
secure in comfey new shoes
just me and happy feet.

Commuter bus zooms by at 5:40,
sleepy silhouettes settle in
oblivious to me and happy feet.

Green mustang convertible speeds along
late no doubt, this time with top up
keeping warm like happy feet.

Robins gleefully warble good mornings
waking from a restful sleep
as did me happy feet.

I has Happy feet,
Happy too be walking once again.
Posted by cheryl at Friday, March 19, 2010 No comments:

Rybellah woke trembling from another night of whisperings from Mother Earth. Her pleading to humans fell on deaf ears. Why do you treat me this way? Have I not given you sunlight to warm yourselves, to cook your food? Clear, clean water to quench your thirst? Seeds and fertile earth to provide you substance? Trees to shelter you? Why do you poison me so humans? Why ?!?

She was a determined ole soul and even more determined to help humans realize the path they’ve chosen will lead to their demise. We need them, thought Rybellah. Without humans we will no longer be. We need them as much as they need us.

Her clan listened to her plan but their warnings fell on deaf ears. And so off she set on the longest journey Rybellah would ever experience. Her faerie tail disintegrated leaving bits and pieces along the trail, so she may find her way home. Lonesome sparkles separated from their being.

Entering the land of humans, Rybellah’s breathing soon came in gasps, the stench of waste smothering her. Her footsteps laboured but she trudged on knowing she must find a dreamer, if only there is one human who believed. We will be saved. It can’t be that difficult after all.

Rybellah searched the continents, flying over the frigid Arctic, tip toeing over desert sand dunes, searching noisy, hustling city streets, skipping thru Amazonian forests. There were none. Where are the believers who kept this earth alive?

She weakened with every step, with every flight. Without belief she would perish and knew she needed to return home. Home, to family, to loved ones, to life. Her strength waning, she found refuge under an ole Oak tree. Perhaps sleep would help her out of this nightmare.

Dreybgh, her father, appeared at his sleeping child’s side. “Daughter, do you not realize, humans have lost belief, the dream. They consider themselves above us, no longer needing our magic. Have you not seen this? Suffered thru their self destruction enough?”

Opening her eyes Rybellah whispered, “Father, take me home, I am tired, worn and beaten. They have forgotten the magic, are too busy to think of us while they destroy life. This journey was more then I imagined as I found no one who believed.”

“Come my child, my dear Rybellah, return home with me. Our world, as is the humans’ world is doomed. There are no dreams left to be dreamt and nothing to keep us alive. We will pass into time as we have lived, into sweet oblivion.”

Dear reader do you believe in the magic which surrounds us? Once we forget we become the forgotten...

My submission in The Inferno's "Into Oblivion" challenge. As a side note, the picture is a combination of watercolour background meant to show a polluted sky, while the eye and tears represent Mother Earth crying unless humans for lack of a better phrase, SMARTEN UP !
Posted by cheryl at Tuesday, March 16, 2010 4 comments:

The Scent of Spring 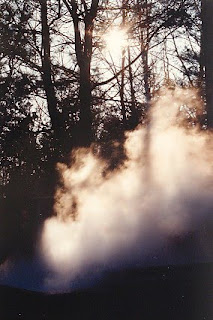 There is a scent this day
in the forest,
the scent of Spring.

This scent envelopes
every living being,
the fragrance of life renewed.
Posted by cheryl at Saturday, March 06, 2010 6 comments: