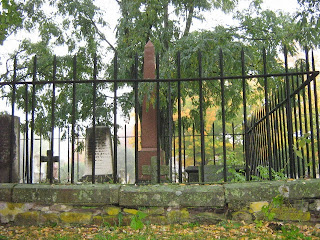 why do you surround my bones
with sharpened iron bars,
don't you understand
my spirit soared long ago,
the moment I ceased inhaling life
mine left this existence
of tissue, muscle and bone
to take its place amongst the stars...
Posted by cheryl at Friday, November 22, 2013 No comments: 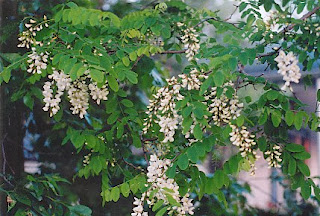 
“ The tree which moves some to tears of joy is in the eyes of others only a green thing that stands in the way. Some see nature all ridicule and deformity...and some scarce see nature at all. But to the eyes of the man of imagination, nature is imagination itself . “    William Blake


Mr. Blake was very astute. In the Acacia, I not only see strength and longevity but the beauty of its blossoms that nurture bees; strong limbs that provide a home to squirrels nest; fallen frosted leaves creating mulch for the undergrowth; gnarly branches casting eerie shadows upon a blanket of snow; and the heavenly scent of honey wafting through the neighbourhood.


Nature is my reality and my imagination. Thank you Mr. Blake for stating the obvious, at least to me.
Posted by cheryl at Friday, November 15, 2013 2 comments:

The Pond has a Redo

August brought a few changes to The Pond. The monsoon rains this summer made the decision to change more pressing. It's not a good thing when an inch of water flows to the foundation. Not good at all.


When I laid it many moons ago it was slanted away but as with everything, things settle with age. Feel free to use your own mind to ponder “things” ;) So the quest began. I thought of hiring someone to lift, regrade and lay but finding a crew to do just that was next to impossible; besides I needed a change and had always admired flagstone patios.


I had the great fortune to find a young man Mal, who was eager, dedicated (to the extreme), but most of all he listened! O my stars, a man who listens is as rare as a diamond in a coal mine. Me thinks I'll hear about that last sentence.


I could write on and on about the process but it would bore most humans. I won't write after digging up the old one I had found garbage bags laid out flat when I had run out of heavy duty plastic. After 20 odd years they had never broken down! I won't write that after a brutal work week I came home to sand and stacked stones and said bugger this! I'm at the beach for the weekend and so planted my chair in the sand. I won't write how me and Mal laid out the stones lining The Pond on the hottest day of the year while listening to Willie and Lobo. I won't write how the froggies were undisturbed and grooved to the voices, especially Mals. He learned real quick how to speak frogaleeze.


But I will write on how pleased I am with the new digs. Of course the pergola posts had to be stained to match the new steps. I bribed a tall coworker into helping, he began at the top and I at the bottom and soon our brushes met. The colour had to coordinate with the stones doncha know. Next spring the house will be painted to match, a lighter shade but at least it will flooooowwwww and that's a good thing as Miss Martha would say :) and not a more perfect place I could find for pondering... 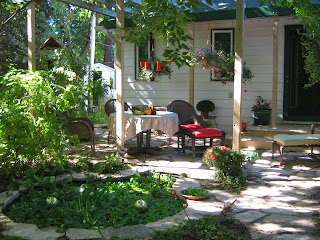 Posted by cheryl at Saturday, November 09, 2013 No comments:

Grass is greener at Haiku Heights