I've been researching my family tree's in anticipation on my journey to the motherland. I was focusing on me dads family but of course I'm like a butterfly and flit back and forth to me mothers side. I had thought the Moss's arrived from Scotland, born in the moss bogs between Scotland and England but noooo the earliest I've found so far is from Ireland but that works for me !  I knew all along I had an infinity for the green isle and the name Moss is so befitting as I have a thing for green. ;)

While researching I found a birth certificate of a great grandfather on me mothers side. I read it and had a moment. I wonder why after 69 years from his birth he needed one. But the emotional part was when he filled out the Birthplaces of his parents. How very sad is that.

Don't no. No other description or hints, just Don't no. How he, a very proud farmer, must have felt when filling in the form, I can't imagine.  I'm sure his heart ached as much as mine when I read it. But thanks to the great wide web and me dogged determinedness I will find their birthplaces and hopefully his soul will rest knowing they aren't forgotten. 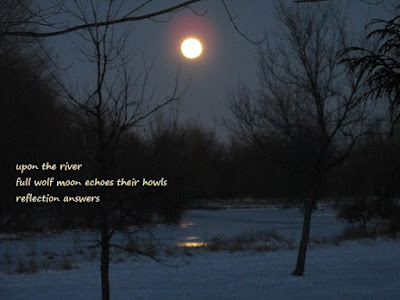 A brisk winter morning
spent seeking the Fab Five
before duty called me to leave
such a wonderous sight
only to discover there was more.
I stood surveying the skies
checking off the list of Mercury
so dimitiive under the brightness
of Venus that held her own
beneath Saturn, then followed its
brillance upward to Mars diminishing
in the dawn light while Jupiter
was still bright in the heavens.
The more was the gentle falling of frost,
ice crystals softly and silently fell
on to the earth; naked branches
soon glistened, ground snow was
became a carpet of crystals,
and I inhaled natures magic...

In
headlights
I
see
movement.
My eyes
follow
fur.
A
coyote
leaps
over
snow bank


While driving home last night along the canal road I spotted this creature.  Tomorrow I shall warn neighbours to keep their puppie wuppies close.

P.S. I dare you to read it out loud in a Christopher Walken voice :)

A few days after Christmas we were treated to hours of freezing rain. It wasn't unexpected with the temperatures we had. Christmas Eve warmed up to a high of 60. There is something wrong sitting on the patio at Christmas. It's just not right for this Canadian. I expect and want snow Christmas Eve and Day then it can pizz off.

It was a treat wearing running shoes sans socks in December. No mitts, no scarf, no boots, no parka; it was pure freedom from winter garb. But the best part was not having to scrape the cars windows at 6:30 am. O what joy that was. Every morning brought a “wooooo hoooo” from me as I walked to the car.

Then it came. A night of freezing rain. I curled up looking out and decided to look at the positive side. The trees were adorned with crystals all a shimmer. My town replaced the old lights with LED's autumn past and instead of that dreadful orange glow, every light emits a soft, pale green. The light shines down and out instead of up. While there are still too many lights on blocking the night sky at least it's an improvement.

These are my thoughts from that eve...