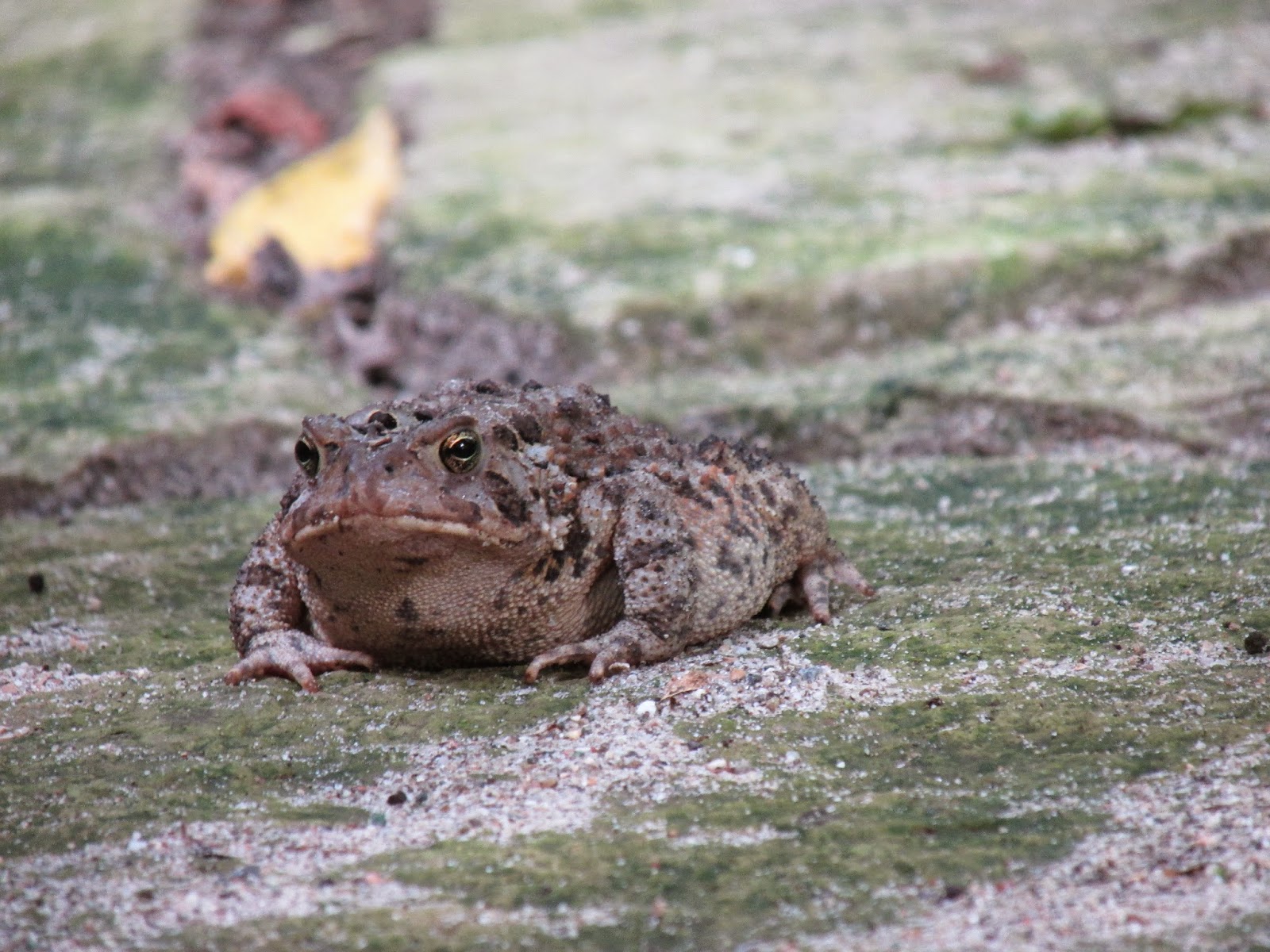 This fellow has taken up residency in my garden. Bully for him! Mind you I'm a tad ticked because he was no where to be found when the slug invasion took place. Boooooo for him!
Mr. Toadie seems to come and go as he pleases and in a way that pleases me, though I wish he would clean up the garden before gallivanting about.

The early days of autumn
and leaves twirl and swirl
slowly to the ground
nipped by an early frost,
while a warm breeze blows.

This aubusson carpet
lays upon the garden floor
with leaves of walnut yellow,
purple of red maple, and young maple
all woven from natures loom.

Soft and plump from damp days
they will soon lay themselves
creating a right of autumn
to walk upon crinkling leaves
dried by the waning sun.

No more the soft carpet
of nourished growth and life
filled with nutrients
but the colours of the demise
of our seasons of life.

My lover, my partner, my man

my lover, my partner, my man

Looking out to the garden I smiled at
the early morning memories of silken strands
woven through branches glistening in sunbeams,
while frogs slowly appeared at waters edge
to take their place on the warming stones.
McChippie quietly scurried back and forth
his cheeks stuffed with ripened apples,
unafraid of us sitting and chuckling at his bravado.
Birdsong greeted us; geese flying overhead
were met with “go back! It's too soon”
as nuthatches and finches added to the chorus.
We eased into the day with steaming mugs,
smiling faces and bliss in our souls
my lover, my partner, my man and me.

Branch out to Haiku Horizons

Well, Blogger is telling me I have 299 postings or as I prefer ponderings, so I thought the next better be a good one. 300 in seven years. Who would have thought when I created this blog I would still be tacka tacka tacking after seven years. In fact this is me first post by The Pond. I kid you not. Pondering today I thought alrighty Cheryl why not take the lappie out and write instead of journalling then wandering away to do something else. And so I have. I have actually remained in one place! The battery is “suppose” to last 6 hours and it will be dark in 3 so I figure I'm safe. Mind you in this light I see way too many peanut butter smears and crumbs so a good cleaning is in store. See what I mean about wandering. Now on to the celebration.

I built The Pond 12 years ago when I became bored with my garden. As most gardeners do, they reach a certain point where they need to dig, realign a border, transplant one area to another. Tis a terrible disease we suffer from but we do recover only when we dig again. We are creators after all. A garden is about nourishing and growth and mine had reached its pinnacle so it was time for something new. Gardeners should never be bored ;)

The Pond has brought me such joy and a renewed respect for Mother Nature and her hissy fits. As a woman I can relate. I've watched frogs be reborn in spring after hibrination, a wee snapper seeking solace from the tumultuous river, to the most colourful birds bringing their babies in for a bath. It's a playground for creatures and one I highly recommend for anyone with a garden. Get thee a pond! Or a birdbath, any thing to draw in nature and your soul will be rewarded.

When I created Ponderings from The Pond it was a site where I could e-mail the link to friends and family so I wouldn't make them wonder what's she gotten into now with midnight e-mails from The Princess of The Pond. Unfortunately for them I had figured out how to change me e-mail ID and had a wee of a time with it. I'm sure there are a few classics still residing in In-boxes or WTF Folders, and you know who you are.

As I sit here I'm surrounded with soft chortles from wee frogs bouncing off the water lettuce, the crickets chorus or Chanson des Cigalles along the fence, the bbbbrrrrrrrrrrrrr of Petit La Rouge warning Black Bart not to steal anymore of his stashed walnuts; and McChipster running through me feet gathering apples. Not one lawn mower is running this eve, though it's early and neighbour OMD hasn't arrived after his shift. But he is another story.

I was new to blog land but soon picked up a few followers. I delighted in their comments and I soon learned how to comment in return. It wasn't easy with an out of date pooter and a rotary connection (between 6 and 7pm was the best time when everyone was off line and having supper as I told meself) but I continued on. I miss those mates, June from Oz who declared me a “strong poet” that took me by surprise as I've always said I just ponder; Eric from Ruminations who soon became a good blogging buddy; and Speedy, o the fun we had; Robert who is an amazing poet but doesn't realize it; Dan who wrote the most wonderful senryu; Cath another wonderful poet; Ray who painted a portrait of me after reading one haiku and that painting resides in me home; and I will never forget Khaled's poem when a Ladybug whispered to him. They were great support but sadly have disappeared and so I refuse to update my followers list in a way it's to pay homage to them.

One woman who has been with me from day one is Michelle at RamblingWoods. We still go back and forth and anyone who reads this I ask you to visit her site. She is an amazing woman with more information about nature then you will ever be able to comprehend. Thelma Mossy on the side bar comes from Michelle and in a way it's spot on. Thank you Michelle for being here.

I've joined a few sites over the years but after a disastrous to do I learned to approach with caution. I gave it me all but it was not to be. I felt I wrote a few momentous tales with its prompts but after asking for payment to post, that ship went down in flames. That was such a sad day and a lesson learned. A haiku site I was involved with ceased and deleted all previous links, which was a shame. I felt contributors were tossed aside as if we were dirt. Haiku Horizons is one I feel at home with. Robert has picked up the gauntlet and laid it at our feet. Thank you.

One of the positive notes is I self published a book last year. Ponderings from The Pond given to family and friends. It contains most of this blog but other poetry and tales as well. That was a true labour of love and took me nearly a year to make it just right. I was near blind editing and re-editing and re-re-editing it and still a few oopsies were made. Though it cost me dearly I have never regretted it. It's a part of me, and copies reside in the National Library of Canada. Me and me ponderings will live on after I'm physically gone.

I now look out at the garden and sigh, I will miss this in a few months. There is such greenery from hostas, ferns, violas, goats beard, toad lillies, penny worts to name only a few. Colour is far and few between but that's me nature in the garden. As long as it is green I will inhale. The only true colour is in spring when daffy's bloom and laugh at the sun, other than that mine is one of ooommm, a calming garden. I need that after the day, where I can relax and breath besides Miss Moss is me name after all.

After 7 years which way I think Ponderings will sail? Only straight forward, onward and upwards as I say. As a fan of animation there is a great scene from Peter Pan where their ship sails through the clouds and I am always in awe when I see it. So as long as I breath there will be posts, some far and few between but I always check in. I envy those who post every day. How do you find the time?

I have great ideas and photographs for posts but after spending 8 hours working with pooters then tending the house and garden I am pooped. Ponderings will remain posted on weekends when I have time. Then again winter will soon be here and the forecast is for a long snowy winter. Am I happy? Hell no but that is life at The Pond.