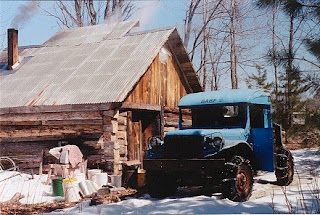 Tis that time of year when we focus on the sweetness to come. I be talking of maple slurp season! There is nothing finer then spending the day out in the sunshine, working ones butt off hauling buckets, chopping wood, feeding the furnace and savouring the aroma of boiling sap. Mmmmmmmm, heaven tis is. You are surrounded by that heavenly scent.

A dear friend, Don, built his own sugar shack out of hand hewn logs way out in the back forty. To arrive, you had to walk thru pastures, dodging the horses, appeasing the rotties and make friends with the wondering eyed mini sheltie. I was more unease with the sheltie as you never knew what direction he was going in. Teddie was cute but that un-neutered male had a thang for parkas, I digress…

Well the perfect day began. I arrived Sorels tightly tied over those grey wool socks with the white and red stripes, red Stanfields, jeans, sweater, mitts, scarf and da parka. Can’t be too over dressed ya know. Bro was there feeding the fire and Don was preparing for the gathering. A sugar shack is not a one person operation, far from it. Two bodies are minimum, but as in any undertaking, the more the merrier.

While the furnace roared it was decided we needed the main ingredient, sap! Bro stayed to prepare while Don and I took off to gather the liquid gold. Easy peasy it sounded until I was shown our transportation. The Blue Babe. Yep that be her in the photo. I asked Don if she was certified. I will not say what his response was, as munchkins may read this.

Pails were gathered, deep breathes were taken and off we went. Now Babe had no glass where normally glass would be in vehicle windows, the doors only worked from the outside and did I mention there were no such things as seat belts? She was bare bones to the floor and not even mice made a home in her. She was transportation and that’s all what was needed.

We roared thru the woods stopping every few trees and it was me job to jump out, grab a pail and visit each tap, pouring the elixir and toddling back thru knee deep snow to pour into the main tank. Once done, hop into Babe and off we would go to the next tapping. The ole legs got a work out that day.

Well, being Spring there is a thaw. What was once a kinda sorta trail soon becomes a quagmire of mud and snow. Yeeee hawwww, soon we found ourselves literally skidding thru, Babe at a 45 degree angle and me saying “come on girl, remember that choo choo, I think I can, I think I can”. She could and did !

O what a day it was. We finally made it back to the sugar shack after much laughter and hard work. The final product, Maple Syrup was deliciousio! Me only regret that day was I didn’t drive Babe. I was asked but spent most of the time laughing, getting caught climbing thru the window and just having way too much fun. Now that I ponder not knowing how to drive a stick wouldn’t have mattered either. :)
Posted by cheryl at Saturday, February 28, 2009 10 comments:

Mmmm Motown, soulful music and heartfelt lyrics. I’ve had this in me head for sometime using only titles to describe a love affair. In celebration of 50 years since the birth of Motown……………


Them: Two Lovers, Under The Boardwalk
She: The Way You Do The Things You Do
He: Baby I Need Your Loving
She: Baby I’m Yours
He: Feel The Need In Me
She: How Sweet It Is
He: Love Machine
She: My Guy
He: When A Man Loves A Woman
She: It Takes Two
He: Heatwave
She: I Like It Like That
He: Oooooo Baby Baby
She: I Second That Emotion
He: Then Came You
She: How Sweet It Is To Be Loved By You
He: My Cherie Amour
She: Let Me Be The One You Need
He: My World Is Empty Without You
She: Just The Two of Us
He: Ain’t No Woman Like the One I Got
She: You’re My Everything
Them: You’re All I Need

Well well well, I came across an article the other day about the latest rage Fish Pedicures. Uh Hunh you read that right. You sit with your feet in a tank of warm water and these widdle fishies, Garra Rufa’s to be exact, gnaw the dead skin of your feet. Hhhmmm, just the fact they do this makes me say ewwwwwww.

Whatever happened to the good ole days of scrubbing yer tootsies with a loofa or worser, those metal mandolins shredding your feet raw. So raw you slather them in lotion and build up even more dead cells to slice off next time.

However ! We are part of the animal kingdom and look at others who do the same. Birds remove ticks from giraffes and elephants; suckers remove ummm whatever from whales. If it works for them it’ll work for me.

Just the thought of dangling the tootsies in warm water at the end of a long day, goblet nearby, and allowing fishies to tenderly kiss em, mmmmm. Me thinks this may be nirvana. Okies, reality check they aren’t kissing them but it does sounds nicer.

I’m pondering if froggies would do the same as I relax in The Pond…
Posted by cheryl at Thursday, February 19, 2009 9 comments: