Tear down
the once loved tree
its crooked branches
webbed and dusty.
Stow away memories
of a happier time
when it was shared
on joyous occasions.
Replace the shimmer
with iridescent tarnish
as a thousand sands
of sparkle fall
to be swept and tossed
out in the trash,
with tinsel rusted from tears.
Silence heavenly voices
angels from on high,
their chorus screams
from the strangulation
of serrated ribbons
which hung glass ornaments
collected with care
through the years.
Toss tins of cookies,
mouldy cherries
and rancid nuts,
leftovers from baskets
fermenting in the fridge,
sacrifice to the composter
and wait for decomposition
when worms awake.
Salvage paper wishes
of love and good cheer
to be stored in the box,
held and reread next year,
when the good wishes
be faded as the ink, or be
flicked off by curled edges
on aged parchment.
Wrap me in your arms
confirm to me there will be
better days, more warmth,
happiness and peace.
If not there will be another
time, perhaps another year,
as it remains to be.

Anybody got a flamethrower?

It seems my idea of melting the white shite and ice isn't as popular as I thought. It sounded perfectly sane to me. Obtain a flame thrower and blast the patio. It's made of stone so wouldn't burn. Alas, there is not one to be found in this town. It's alright for CT to stock semi-automatics but flamethrowers, noooooo. ~sigh~

So I spent a few hours hacking away at the landing and finally cleared it. Mind you I'll have to re-stain in spring due to the scraping away of the top coat and maybe a few, ummm, grooves will need to be filled. But I was going to do that anyways, yep, I'll stick with that reasoning and remember how they came to be in May.

Next came clearing of the patio itself. After I made it past the bottom step I realized it just wasn't built up white shite. Lets see, we've had so much of everything in the past week; last Saturday after a foot fell, I scurried out and cleared it off, creating a path to the composters while I was at it. Overnight it froze rain for hours, then snowed all day Sunday. See where I'm going?

Monday eve went out after more freezing rain and like a certain entity, literally walked on water, mind you it was frozen but yes I too walked on it. It's layer upon layer of snow, an inch of ice, snow, 3 inches of ice, and more snow lovingly delivered yesterday. It made me look at the sky and cry out “Santa, I was such a good girl all year long, why???” Perhaps I'll go to hell in a handcart next year and see what he brings me. Maybe a shiny, new flamethrower?

After a few hours I called it a day, not quite finished but will do for now. The chair was released from its icy prison, mitts were soaked from throwing hunks of ice and the birds were becoming verbally cranky because I, their host, the one who spends good money on seed and ensures the feeder is always full, was toiling away and they vanted to be left alone to eat.

Sitting in the wet chair looking at the chunks, I thought those would make a mighty fine igloo. Solid and flat, easy to carve, and not about to melt anytime soon. Me thinks I just may have a weekend project. Perhaps a few small ones to provide homes for the squirrels and Pooka. Then again it sounds like a lot of work in the wet and cold and I've had enough of this, merci very much. Anybody got a flamethrower? 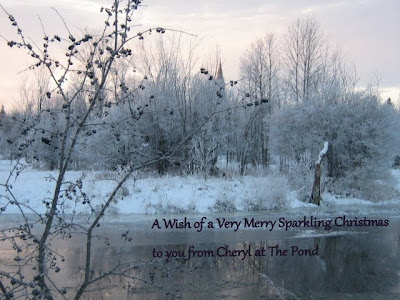 It's Christmas Eve, the tree is lit, I'm bundled from the frigid cold and alone wondering what to do this night. I can only watch Elf so many times though his scream of SANNTTTAAAAAA still slays me. I won't say how his leap onto the Christmas tree sends me into fits of laughter either.

Hearing the chi chi chi from outside I looked out and saw the shadow of the cardinal at the feeder. Ahhh like clockwork he arrives. Before sunrise and at sunset. He lives in shadows, or prefers to dine alone when the doves, chickadeedeedees, and juncos find their beds in the hedge.

I spied a form at the base of the feeder. Hhhmmmm, that's an awfully big bird I thought so I opened the blind wide. Can't be a cat, they don't care for seed, nor a dog. Wait! It can't be! It tis!!! I would know that tail anywhere! Poooooooooooooooka has returned.

I haven't seen him since one rainy eve in May, when I had a wee chat with him asking to leave the garden alone. There's a park nearby I explained, and he was more than welcome to seek nourishment there. He hopped off with a flick of his fluffy white tail. I'm still not sure if it was an Adios! or not having fingers the other type of salute.

I watched him munch the sunflower seeds I had spread onto the snow for the ground feeders. Obviously he dined well all summer as he is one BIG bunnie! I'll search the garden in daylight to see how he got in because the garden is completely fenced and with the two feet of white shite there isn't room for even a mouse to squeeze under the fence.

As for me, I feel better. I have a bunnie for Christmas, not your ordinary bunnie but Pooka who is a very special bunnie. Tomorrow I will leave a few carrots out for him and spread more seed. After all our furry and feathered friends should enjoy Christmas too.

for Andrew, my breath, my heartbeat, my gift...

Join the Toads for more Tanka 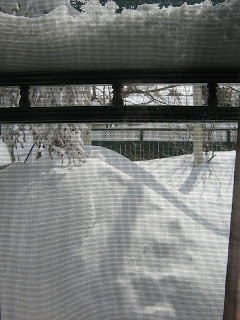 Me thinks we're in for one of those winters. Even though it's not officially here the signs are there. 2' of snow already on the ground and this day it kept falling, sigh.  I don't mind the white shite in moderation of course because it brightens the landscape. Tis a nice change from the colourless November, but it's becoming ridiculous.

One must become one with the flake and determine when it's just right to shovel. Case in point. A foot of the white shite in the drive that must be cleared. However, freezing rain is now falling. Now anyone who knows snow like a Canuckian knows snow, knows one should leave the snow to provide traction beneath the coating of ice presently building up, and I know snow.   ;)

I shall toddle off fresh from filling the bird feeder, catching flakes on my tongue while listening to bells on the sleigh horses echoing from the park and will sleep well tonight. Tomorrow is another story when I ponder winter has yet to officially arrive.

Follow the droplets to Haiku Heights for more dew.
Posted by cheryl at Monday, December 16, 2013 14 comments:

Bitter cold suffocates us
sucking out breath with its talons,
ripping at throats of those fools
who dare to venture outside.
While a dastardly wind blows,
trees bend in supplication
whispering to the night wind
for relief from shattering limbs.
Snow levels rise enveloping
sheltering boughs of confers
planted for the avian creatures
naked legs, shivering in the cold.
Christmas lights twinkle in the wind
providing little warmth to wayward souls
only to those brave enough who peek
from tightly closed drapes drawn to colour. 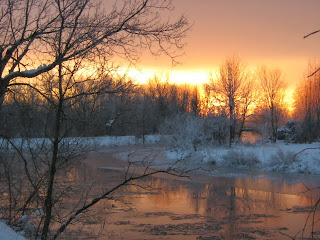 Posted by cheryl at Saturday, December 07, 2013 No comments: