Throwing the bath water out


The landscape is parched, never have I’ve seen this in all these years. Plants cry out for water and I oblige, never minding the constant tick, tick, tick, of the water meter and the cost. My babies need substance and that’s all that matters. An hour is spent hosing the ground, but not before gentling forking the earth. This gives water a place to seep instead of running off to the paths. Paths do not need water, the treading of footsteps know their own way to wanderers.

First half is done, than I turn the hose to The Pond. My o my, they can get a bit cranky when water cascades onto them. Them, being resident froggies. The wee ones squeak and hop into sheltering shrubs. The larger ones sit with backs strong and heads craning to the sky. Little do they know I have a fun streak in me…

After the garden is soaked I turn to the patio where many have found refuge. Geeez guys it’s only water I think. One wee froglette sits startled so I gently tease him. “pppurrrah” he sings. Hhhmmm, has Frogue been spending time with the neighbours’ cats? Another nudge, and the same “pppurrrah”. So I continue, until he’s safe among his kin. Mind you I’m wondering where he learned his song but I won’t loose sleep over it.

When The Ponds water is again high I pick up the ole bird bath in need of a good rinsing. Months ago there were too many birds trying to sip from The Pond so I placed this ole blue clay bath amongst the shrubs. I had no idea the older critters would make it their home. Not sooner than 5 minutes after cleaning and filling with fresh water then two good croakers had found their home, again. They splashed about and sung their song of rain fore coming while I shrugged thinking come on guys you have a 2’ deep pond to frolic in but nooooo you just have to park your arses in the bird bath scaring every bird that drops by for a sip. 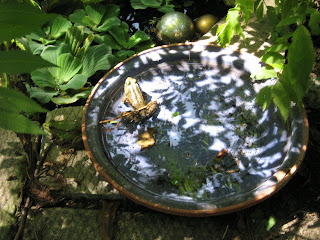 Seeking my throne after the watering I noticed one underneath. He sat steady never flinching when I moved. I finally rose, moved the chair and he hopped off. Well, well, well, it appeared he was doing his business. Not as impressive as a toads’ I once saw at my brothers. There we were 3 adults standing over a stone wondering “what’s daaatttttt?” We continued to stare intently while Mr. Toad did “his business”. Whoooooaaa, this observation was followed with an in depth discussion on how we as humans would feel relieving ourselves with a turd half as long as our body. The topics in the forest never surprise me. I digress.

For now the garden is refreshed, plants are plump with moisture and I have one froglette who appears nightly staring at me. If he smiles and wiggles his bum at me I’m outta here. 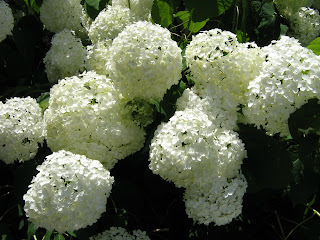 Sun lowers herself
creating shadows thru leaves
bowing in this drought

Hummers drink heartedly
fortifying for their journey
to warmer climates