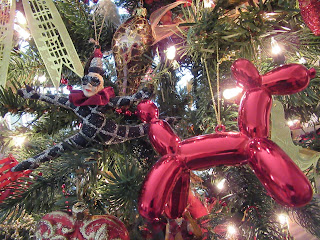 I luv luv luv a Christmas tree with boughs weighed down with decorations.  The more ornaments the more magical it tis in my eyes.    Lights of every colour, woven around every branch provide the sparkle along with metallic tinsel.  Shimmer on !

My tree is bespoke and beloved with ornaments from childhood, recognition of special moments in time, and those chosen by dear friends capturing our life long friendships. Those hand painted and sewn by beloved ones who have passed are gently hung on branches of honour, front and centre.

Collections of Harlequins to Balloon dog; glass hearts to musical metal-stamped ribbons; fabric fae to bejewelled frogs; they all express their love. And isn’t that the meaning of Christmas. Love, peace, and friendship.

Posted by cheryl at Saturday, December 25, 2021 No comments: 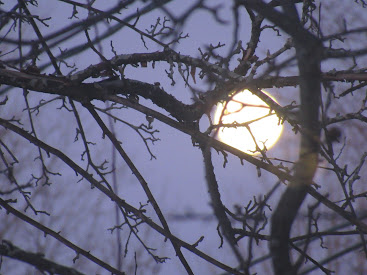 As night falls, though it’s truly the sun that falls while moon rises, moon rising creatures begin to appear. The creatures I write of are those who live during the day but pay their final visit to the feeder as daylight fades and darkness begins. Perhaps I should write of evening visitors instead.

Mr. and Mrs. Cardinal soar in seeking seed tossed aside from the bird/squirrel feeder. They were a tad too late as the squirrels fed fully this day and there wasn’t a seed, a nut, or even so much as a peanut skin left. Their visit wasn’t long. After poking at the ice covered pond for refreshment and finding none they flew towards the winding river.

Squirrels made one last visit before seeking their nest. There are now three, two greys and one black. Where there brothers and sisters have gone are no one’s guess and I don’t want to guess with the speeding traffic on my street. The remaining family are plump with fluffy tails, similar to toilet brushes in size and fullness.

Northern Junco’s appeared without their “ping ping ping” song. Perhaps their vocal chords are still in summer mode. They were joined with Nuthatches, big and bold walking upside down on the tree’s until they land in the feeder. It takes a while. I would too and I wonder if their heads rush causing them to wonder which side is up...or down.

Tis twilight, when the sun has bade nightie night, and the moon smiles, and stars have begun to twinkle. It’s one of my favourite moments in time when the night sky is sparkling with life in galaxies beyond ours. It is a restful night, a peaceful night.