For weeks I've heard nothing, no call of robins, no chortle of finches; the bird song has become non-existent. While it saddens me I understand nature. The young ones have left the nest so there is no need for their parents to sing them awake to begin their survival training.

I shall remember the two broods of robins nesting upon the side door light. The first brood was exciting to watch but when the second began not three weeks later, I held my breath. They all survived though their parents were thin and worn. 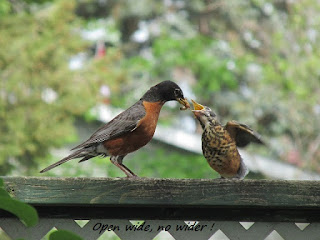 The blue jays, with three spawn, were a delight to watch. The parents brought them into The Pond nightly to quench their thrist while they searched for supper. They are truely clowns when left on their own, and I took such pleasure in watching their antics.

Of course the sparrow who has alighted here for years dropped in for his daily bath. I am unsure if it's the same one but the habits are too similiar to be another. I could superimpose photos each year and its schedules are the same. Alighting in the shrubs, pecking about, then diving into the bird bath for a shower, then flying to the cedar for prunning. It had to be him!

The doves, those mourning doves, with such a sad song. Parents nesting across the street would drop their two dovelings? at The Pond. For weeks I watched while the two siblings cuddled til a parent flew in with a mouth full of food. They both ate well, and I am sure they are the ones now gleaning the sidewalks for seeds..

I'll never forget the pileated woodpecker. He was huge and bright! His squawk always announced his arrival as he landed in the old maple tree every few days to bore into rotten limbs. With a beak full of worms his lady would alight and they would share the meal. 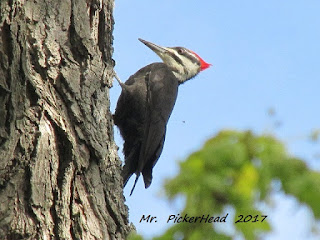 As autumn draws near, their summer voices have been silenced as they seek comfort in the wild. I wish I could join them...

fireflies have left this plain
seeking companionship
in the heavens.
Perseides cloak the skies
its showers enveloping
fireflies lost
in the seeking of love.