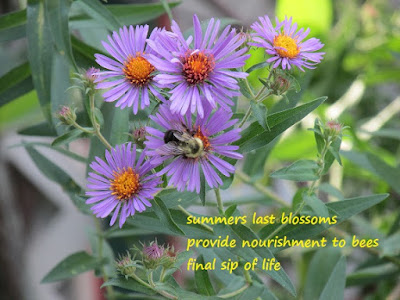 End of the work week and I sat back enjoying the garden and its creatures. I sought solace after an emotional week, not to mention temperatures usually found in Hades. Or so I'm told.  I spotted Bart one of the resident black squirrels making its way along top of the fence. I sat upright and thought what is that in its mouth? It's furry and there's a long tail swooshing to and fro. Squirrels eat nuts and birdseed and veggies, not each other! My eyes followed it up into a recently built nest in one of the acacia's in the front garden. Hhhmmm.

Bart made its way back on top of the fence, then through the trees into the trees in the back. I dashed inside for my camera to sit in wait. This is just too bizarre I thought. I sat and sat with eyes scanning the fence. He tricked me! I saw movement among hostas. He had another! In his mouth. Only it wasn't black but grey. O no you didn't raid Petit la Rouges nest 'cause he won't be happy I said out loud.

Again I watched Bart and its captive climb into the nest. Soon after, the ole grey squirrel whom I call White Tip because of the white tips on its ears appeared in the next tree. I know, I know, not imaginative but it works for me. It joined Bart and they ummmm appeared friendly if you know what I mean. How does one differentiate between squirrel sexes without actually looking real close.

My eyes returned to the nest and there they were. One black and one grey squirrel babies. The baby black joined Bart or maybe I should call it Bartess? And they played in the tree. The young grey remained in the nest watching. Where White Tip went, I don't know. Maybe for take out ?

I guess it was time to move to a more scenic spot but I was certainly surprised to find the mix in one family. I wonder if there is such a thing as striped squirrels, kinda sorta like skunks or zebras. Now that would be too cool! The good thing about the new nest is that it isn't up too high so that's usually a good indicator of little white shite. And that's a real good thing! 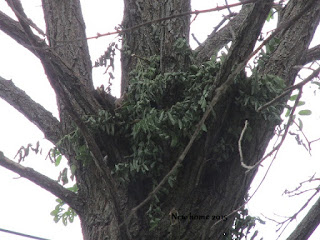 P.S.  if you click on the photo it enlarges so you can see the two captives  ;)
Posted by cheryl at Saturday, September 12, 2015 2 comments:

Where has the birdsong gone...

It has been weeks since I've heard the wonderous birdsong in the morning. Me thinks mums and dads have raised their chicks and so they venture onward without the encouragement of their parents. Personally I feel sad without their song but it is the circle of life.

Robins had two broods this year. Only one hatchling each made it to life. I was blessed to watch and hear their their upbringing. Early evenings found a parent perched on the roof chortling while the babe did its best to answer. At first I thought what is the noise but once I realized the chatter were them conversing to each other I had an ommm moment. The babe was doing its best to mimic its parent. This conversation lasted for weeks and I found myself rushing out to the garden after supper just to enjoy it.

I was delighted to receive a family of blue jays to the garden. Their visit lasted only a week but o what a week it was. The parents and five baby blues galavanted through the trees and wrecked havoc at The Pond. As I said to a friend the babies are jokesters, spinning on branches, attempting to walk on the pond plants and alighting on the table with me a mere 2' away. All the while nattering amongst themselves. They were full of life and adventure.

Sparrows have now sought other comforts. I truly miss this one sparrow who hopped about the garden and bathed itself every evening. It glided in as silently as the breeze and took refuge in the bird bath. A few minutes later, off it hopped only to take wing at the garden border. Just a brief pause to cleanse itself from the days gathering.

For a time I needed to not set the alarm clock for I was awakened at 4:30 a.m. on the dot! by birdsong. With windows wide open their “good morning” was all I needed. Now I hear the constant drone of crickets and tree frogs. This tells me summer is coming to an end and the white shite of cold and vacant life will soon appear. While I relish their song I still miss the wonderous voices of birdsong.
Posted by cheryl at Sunday, September 06, 2015 2 comments: