A dear friend dropped by to clean out the eaves troughs and while he was up on the roof he asked if I had chicken wire and heavy wire and don't forget cutters. I'm on it! The vent was twice wrapped with chicken wire and tied off with the heavier wire. Ahhhh, it looks bootiful I exclaimed.

Late afternoon the wee fecker returned from his neighbourhood patrol. I could hear clawing and squealing while inside the house and so I snuck out to the patio. There he was scratching and pulling at the wire. He heard my giggles, turned and ran to a branch above me. Was he pizzed off! He stood thumping his feet all the while nattering and threatening me. I returned to safety inside for my camera. 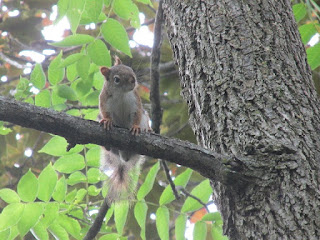 Back up he went to lay waste to the barricade. He managed to sneak half way in under the first layer but backed out. Around and over he went, snarling the entire time. He was not a happy camper, but I was and rubbed it in with laughter and remarks such as “told ya sooner or later I would win” and “I asked politely to cease the 1 a.m. games of walnut basketball but you wouldn't listen”. 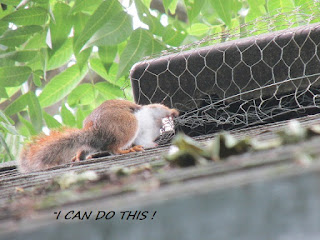 After supper I went out one last time. His poor me I am homeless now human stance didn't fool me one bit. It was a ploy. I knew that, and he knew I wasn't about to be sucked in no matter how cute he was. He's been a shite disturber for a year and now it was payback time. 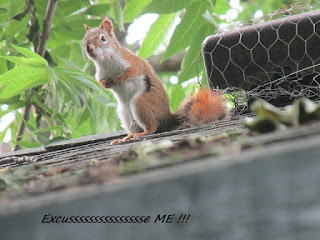 As night fell I looked out and saw him silhouetted on the eaves. I did have a pang, just an itty bitty pang of guilt but what I've been through the past year, feck him! Find another home, another red to harass and life will be peaceful once more. Well almost.

Tonight I came home to the garden and patio littered with walnut fronds. I guess the pile is his way of saying, I may be out of your home, but I'm near, very near.  If only one of the umpteen contractors, roofers, handy persons would return my call to have ALL the vents replaced and electrically wired I wouldn't feel the need to sleep with one eye open.

As daylight settles
in the west,
twilight shimmers
over The Pond.
Lit wicks of candles
weave to and fro
in summers breeze.
The maestro
taps his baton
and the chorus begins.
The contralto leads
with her oorrraaah!
Oorrraaah!
Oorrraaah!
I of course join in
our voices echoing
through the garden.
Listening to our joy
the bad ass bass
provides the oomph
from his rippling throat.

Frog Music,
lulls one to sleep
with a smile on her face
this sultry summer night.