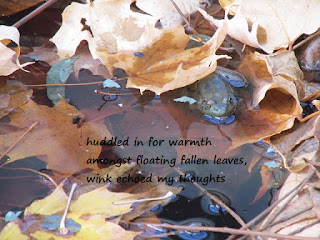 Every day I search The Pond for signs of life knowing it has near ended.  Life fades into the darkness of the bottom as frogs seek their winter home.  This guy was the last hold out.  I trust he has now burrowed into the bottom sand, closed his eyes and is dreaming of the feast that will await him in spring.

You swept in slashing your brush with a vengeance
laying waste to lush, vibrant growth, in one swoop.

Acacia leaves lay crinkled and twisted, a rarity this time of year,
usually holding on til December when they would shimmer
as natures crystals competing with celestial star light,
but now Jack, they lay broken, shattered by your ruthlessness.

Hostas are twisted and drained of life as they collapsed
under your hard brush Jack. They hug the ground in shock
not having the time to wave in a late autumn breeze
in their goldness, shining amongst yews of green, they now mourn.

The ole sugar maple was assualted by you Jack, taken aback
by the onslaught of your harshness she dropped her leaves
in one day. I have never witnessed such viciousness in robbing
her of ancient golden splendour especially one so revered.

The walnut is now barren without fruit nor leaves. She had little time
to prepare against you Jack. New growth fell to the ground while
its fruit plummeted, smashing into a black stain, its skin
withered and black from your brush. Do your pots only contain death?

Ferns that once stood tall now are a crumpled mess Jack.
They huddle amongst each other, fronds amongst fronds.
Though they have the last laugh. The fern so named Autumn
grows green and is full of life. You were not as strong as you thought.

There is strength in nature Jack and while you were devastating
in your first strike, there are those that live on and will survive.

Get it while ya can 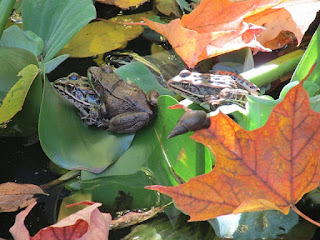 Mr. Leo Pard Frog wasn't happy with his seat number
and especially with the audience of Mr. S Nail
Posted by cheryl at Sunday, October 18, 2015 2 comments:

Tis been awhile since I pondered here. O I've pondered, mostly scribblings in my journal but nothing on line. This has been the first weekend in ages where I've made time for me. There have been too many weeks of being emotionally drained with others problems, serious problems, to attempt to post or visit fellow bloggers. I guess it's me fate having an empathic soul but there comes a time when enough is enough. I finally said to my boss since when have I been promoted to Social Worker.  That was a very black day after talking to a suicidal person for an hour.  It is totally out of me job description but these are people who became friends and I've worked with for 17 years. They trust and confide in me and I just can't brush them off because I do care for them, not just as fellow employees but as human beings who are experiencing tense times. All I can do is find them assistance and listen; and perhaps that's all one needs is someone to listen while they pour their heart out. Not to pass judgement, as we all have our issues, but to actually listen with compassion, share the tears, and a shoulder to lean on. Heavens knows we could all use one of those shoulders. As for me I trod on, just meself and nature.

After waking up to the dreaded white shite fluttering down I spent the day outside bundled up while tending to my haven, the garden. Pots were emptied, begonia's transplanted and brought inside to the basement, hoses drained and hung to dry, and furniture cleaned and stored, except for my throne. That remains outside til I have to shovel. No way am I giving it up this early. I need to be outside as long as possible before the deep freeze sweeps in causing us to become hermits for six months. One positive is that I finally hung the chimes I birthdayed to meself but hadn't hung in case they kept neighbours awake. This way they will tinkle from the winter winds to remind me of summer breezes and birdsong when the bedroom window is open during the chill of winter.

In the mean time I've watched hundreds of blackbirds fill the sky in the morning and evening. They must be roosting in the woods along the river. I watched them take flight one morning this week and it stretched two blocks wide. I've never seen this size of flock before, ever!

blackbirds fill the sky
seeking shelter for the night,
pepper on pasta