The Path of Ab 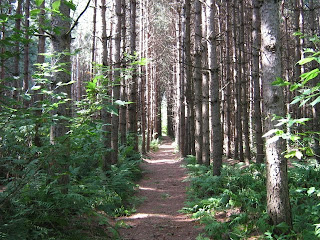 Footsteps are light
amongst his cathedral of pines
as boughs stretch skyward
then bow to the creator
of beaming sunlight filtered
into subdued rays amid the ferns
lighting Abs path with reverence
thru his forest created with love…
Posted by cheryl at Sunday, July 31, 2011 5 comments:

Torrance I never understood
how your beauty shone thru the
watercolours of your life,
until late nights of hot tea
and writing Haiku listening to CBC
O how I miss those,
and your collages of pastels
musical notes and laces intertwined
brought songs to hearts,
though your vibrancy has been lost
upon the wind except for
those who knew you Willa,
you remain as Torrance
strong, steadfast in your life
a true lyrical woman,
and as Willa, you will be forever
drifting upon the Tay, your home
and I shall always remember you ….
Posted by cheryl at Thursday, July 28, 2011 3 comments:

A Mouse In The House 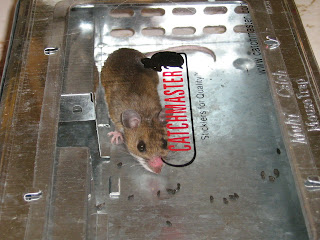 It began one Saturday morn whilst checking out the nursery at Home Hardware. I know, I know but they had good deals on perennials. Any hoo, I wandered along and heard a squeak, then an O My! as this elder grabbed my arm, “did you not see that!” she gasped. “ummm I heard a squeak but thought it was the doors” “noooo! The mouse! You almost stepped on it!” I shook me head wondering how many mice that lady of vintage had seen and why was she so excited about it, and toddled on.

That night I dreamt, during a deep sleep the kind I cherish. The focus of my dream was white, with black whiskers, scurrying about, finally making his way outside, to The Pond where he met Fog and Sog. Actually Twinkle and Soggie Bottom introduced him to Fog and Sog, and all got along famously. They named him Merlin, that wee mouse. More on him later as I’ve been told he has magic in his soul.

Days passed with few signs springing up of a creature in me house. You know the signs, black sesame seeds, though not actual seeds. I sighed, not again, it’s July for heavens sake and it should be outside romping thru fields of clover. Alas, wasn’t to be. Midnight munching in one cupboard, and there goes the cornmeal I thought; little forget me nots on the chesterfield making me not wanting to stretch out on it, black dots well not so dots but rectangular droppings in the kitchen sink. The signs increased as did my worry lines.

The worst was entering the home, my refuge one Friday after a hectic work week. I just needed to zone and forget but that was not to be, my gawd the noise coming from the stove. It sounded metal on metal. On and on it went and after an hour I finally lifted the stove and out ran a wee critter, across the floor and under the pantry door. I grabbed boxes and wood stuffing the door bottom. and with much glee shouted to no one but him "I caught you me furry fiend!" He had feasted on dried rottitini so was well fed, enough for a day or two. All weekend long I minded the Catch Em Live traps and not a bite. Maybe he had found his way out I thought, wishful thinking because I’m such a woose at these things. I’ve cared for folks passing on, holding them to their last breath, tended to the wounded but out and out killing is just not on my do to list.

A few days later and being an early riser I sat in another room sipping me tassie eating the peanut butter slathered toast. Reading up on the overnight news I heard this awful noise from the kitchen sink and so rose and peeked around the corner. Lo and behold He was peeking back at me from behind the canisters, not all of him just his ears and they were huge. I tip toed into the kitchen and poof he scattered across the counter onto the stove and dove in. O lord I thought. He’s gone so I returned to my den. Not 60 seconds had passed and there he was again at the peanut butter covered knife in the sink. Yikes! The sound wasn’t comforting at all. This game of hide and seek went on for awhile. I even found my self hiding behind the corner waiting for a glimpse but this was no ordinary mouse. As soon as I appeared he disappeared. Regaling me work cohorts with the mighty mouse tale of playing hide and seek at 5 am, their comments weren’t comforting “ya know Cheryl, I wouldn’t stay in a house where a mouse knows how to use a knife”. Thanks lads, love you too.

Alrighty then, the live traps didn’t work. The wee bugger went in, ate and backed out. I won’t mention the neighbours watching me one early Sunday morn walking to the river with trap in rubber gloved hand, only to open and shake with nothing falling out. Sighhhhhh, I was beat as the furniture. I don’t want too but He just won’t leave so out came the bucket.

A huge bucket, a good 2’ tall, filled a quarter of the way with water. I’m not looking forward to this. Then as the lads instructed string was tied across the width with one peace hanging down and at the end a dollop of peanut butter. O and don’t forget the piece of wood to be used as a ramp for the wee fella to scamper up on. I was already sick. So everything is set and I toddled off to bed. Next morning I entered the kitchen and no string. Hhmmm, maybe that did it thinking as I peered into the bucket. Arrrghhhhhhh! It was empty and every bit of string clean clean and lying beside it. Okies, this mouse is way too smart to die. He just doesn’t deserve it. Need I say the lads at work had a field day with the tail, errr tale. Going on and on how he sat on the edge, pulling the string end over end til he had licked it, then dropping it all on the floor.

Off to Home Hardware I go ‘cause I’m fed up. Sorry fella but I’ve had it waking to a filthy counter, poops on the chesterfield, tiny feets across mine and late night scurryings and worst of all having to wear shoes in my own home! I’m done and want my home back ! The young lad in the “kill em before they kill you” department was kind. Did you know they actually make a trap with a tranquilizer? Yep, the critter walks in, eats it and bam is knocked out so you can take it to its next home, groggy but alive. I gave him such a look that he almost fainted and finally walked out without the Snapper but the Catchmaster. What’s another 18 bucks if it catches him alive, geeez I’ve spend that much in peanut butter! Made of tin, it’s supposed to find its way in to the food, and a trap door closes. Aha, I said, this I can work with! Set out that night filled with cheese, damn good cheese mind you, a fine Havarti, and peanut butter I toddled off.

Waking the next morning I apprehensively walked into the kitchen, flicked on the light and checked out the Catchmaster, even before I made me tassie, that’s how anxious I was! Lo and behold, there was a little creature with big brown eyes staring back at me. Ha! I finally caught you me furry *&##^% friend! Buckle up laddie we’re going for a drive. Looking at him I must say he had such a shiny coat no doubt because of the great dollops of peanut butter over the weeks. Still in pajamas I carried the trap to the car putting him in the trunk for safe keeping, of course. Off to the river we went. As I opened his confines I bade him to give my regards to Vicky and Vinnie, two voles I previously released there. As he scampered thru fields of grass and clover I knew he was home, not mine but his, and I smiled. 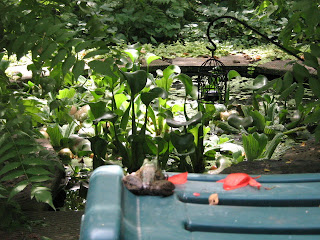 Hungry squeaks from baby Blue jays
safe amongst shrubs;
Plops from frogs cooling off
in the cool ponds water;
Cheerful chortles of Robins
teaching their young to sing;
Snapping of bedding on the line
drying in the warm wind;
Soft nattering of Finches
as they glide thru the trees;
Delightful breeze rustling leaves
as they brush the roof;
Gentle cooing from Doves on high
expressing their love for each other;
Meooorrrrr of a neighbours cat
from a well aimed walnut ;)

Ahhhh, my heart sings this perfect summers day
while Jerryson ponders along side me…
Posted by cheryl at Saturday, July 09, 2011 3 comments: