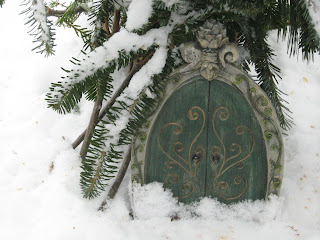 “Ahhh but Twinkle, tis a cool breeze that freshens our home. It needs a light airing out wouldn’t you agree? Besides the ummmm, aroma is a tad high.”

Twinkle and Soggy had fallen asleep months ago, much like hibernating bears in autumn. They had sought solace in a vacant rabbits burrow under the ole spruce and simply drifted off, until today.

“Door? What door Twinkle?” mumbled a yawning Soggy while rubbing his eyes with one hand and scratching his behind with another. Those needles get in everywhere he thought. Then he realized the tone of Twinkles voice and his eyes widened.

“That! That block of wood blocking the entrance. I call that a door. Wouldn’t you?”

Soggy sat up and looked towards the entrance. There was a block of wood, slightly askew resting amongst the branches covering their home, sheltering them from the cold north wind. Where did that come from he wondered. It was somewhat Art Nouveau in design although he leaned more towards Victorian with all its whatnots and whyfores, but he liked this expression of nature man made.

Brushing off leaves and moss they staggered towards beams of dawns light cutting thru the darkness, both somewhat dopey from being awakened before their time.

“Where do you think this came from Twinkle? Why would someone block our home? Have we been found out? Are they trying to smother us?”

“I don’t think so Soggy. Looks like something handmade so lets’ don our winter gear and take a closer look.”

The brothers gathered birds down, crumpled ferns, silk from milkweed pods, and moss, wrapped each other in their warmth, then wound with grapevine tendrils knotted tightly, and off they trudged. The Bottom Brothers were determined to get to the bottom of this.

“Ppppussshhhh Soggy! come on put your back into it!”

Soggy the younger of the two did what he could but being slighter of build his effort had to be twice of his bigger and older brother. Some thought his head was lighter than Twinkles but his heart was larger.

Into the snow they fell, landing on top of the door, splayed limbs into the cold. It struck them hard, it struck them cold, though wrapped in warmth the bitterness shivered them to their core.

“Soggy! Are you there? Are you alright? Talk to me Soggy!”

Soggy limp from the impact wiggled his feet. “Legs aren’t broken Twinkle, see my feet are moving.” With a sigh and a silent Thank You to the stars, Twinkle gathered himself. Lending his hands to his brother he stood him up beside him where he belonged.

“Well Soggy, what do you make of this? I don’t think it was placed by foe. Lets’ put it right so our home doesn’t fill in with snow.” They worked hand in hand heaving and hoeing the hunk of wood back into place. They stood back eyeing the piece standing in awe.

“This was carved with love Twinkle. See the curlie cues, the smiling face, those eyes, and the colours! The colours Twinkle! It was made to keep us hidden and safe.”

Twinkle, always the more serious of the two, pondered, investigating every nuance the door held. “Yes, I see Soggy, it was made to protect us and ward off creatures who may wish us harm. It was made just for us Soggy. And we know by who.”

At that Twinkle and Soggy had a snowball fight. Pushing each other into the snow, laughing and gasping in freshness of the day, of life, they knew they were thought of even during the deadness of winter.
Posted by cheryl at Sunday, January 08, 2012