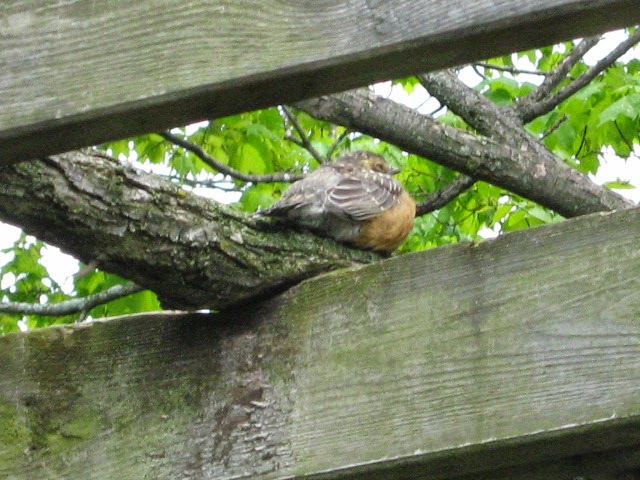 Early this month I found a broken blue eggshell in the garden. Thinking crows had been nest raiding I tossed it aside with a sigh, scanning branches for just one sign of life. It wasn't until the week past when they made their presence known with their soft squeaks from the treetops. Two young robins kept their parents searching from sun up to sun down for food.

After a few hours Saturday they finally accepted me in “their” domain planting this, pruning that, and digging up a bountiful feast while their parents watched from above. A flick of the wrist, a flutter of wings, and soon there would be a juicy worm dangling from a parents mouth while the chicks opened wide. A cacophony of FEED ME! NO FEED ME!

One of them roosted on a branch over the pergola, watching me intently trying to blend in. It didn't fool me because I could still hear the squeaks and clucks from empty tummies. It was a busy day that began at sunrise and didn't end until after dark when the chickies were tucked in to their nest for a good nights sleep. I wonder when mum and dad find their own downtime.
Posted by cheryl at Monday, May 26, 2014