Jerry, the Odd One 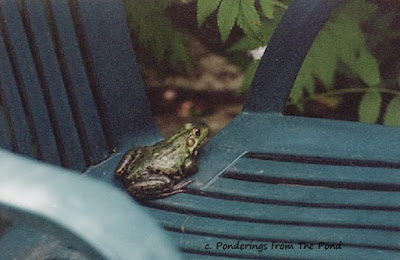 In the second installment of frogs I have known during The Ponds 15th year celebration, I shall write about Jerry. He was a large lad and rather protective of his territory. He was also one of the first odd ones. Odd in his habits that even today I do not understand.

Jerry wasn't content with sitting in the water or on floating plants. He had to sit on a patio chair. All day, every day for weeks. In the evening he would make his way to a planter box to spend the night. At first light, out he would hop, and yep, up onto HIS chair where he kept watch over his realm.

During one particular sweltering day I became concerned he was dehydrating. I need not have worried as I watched in amazement as he used his front legs to smear himself with secretion from his mouth. Using ancient secrets of frog yoga he was able to completely cover his body with a film that I guess, cooled and moisturized in one application.

Another fine summer day I had company for lunch. We set the table and began the feast. One person, who was a 30 year veteran park ranger in Algonquin Park noticed Jerry in his chair. An eyebrow was raised. I mouthed silly me and moved the chair over to the table, with Jerry in it. He sat silently during the meal even though the conversation was boisterous. My friend would peer over the table, see Jerry sitting still watching us, look at me and shake his head saying “Cheryl, I thought I had seen everything in the wild, but this, I, I,....”. I shrugged and smiled.