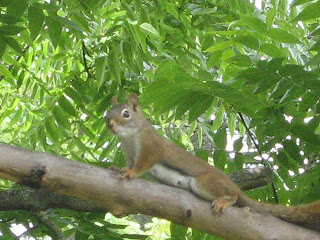 I’ve been trying to photograph Petit Rouge for a couple of years since he moved into the hood and set up home.  You either love them or hate them, but I’m rather partial to reds so you know what I think of him.   He’s a quick wee guy and rather camera shy but he is a character and one who “allowed” me to photograph his greatness.
It was a warm summers’ eve and I was dining on the patio.  He was scurrying back and forth in the eaves trough as he had been for months.  From inside the house it sounded like tiny reindeer hooves prancing, which is fine in the winter but rather out of place in the summer.
Of course I natter to him about the racket he’s making.   He stopped when I spoke only to peer out over the edge and give me the “look”.   When I made eye contact, his head went down behind a branch.  This game of Peek-a-boo went back and forth making me wonder if he really believed he became invisible because who knows what goes on in their widdle brwain.
I anxiously await the annual pillaging to begin.   Bart believes (again, what is it with these critters) he is a hun, a warrior, one sent out by the villagers to bring home enough food to sustain it through the winter.    He hops along the fence tops, up into the hedge, across sheds right into Rouges territory.  His raid is successful when I hear the bbbbbbbbbbrrrrrrrrrrrrrrrrrrrrrrrrrrrrrrrrrrrrr coming from Rouge and watch Bart and his little black arse, his mouth full of walnuts, run back towards his own nest.
Bart follows the fence line every time but Rouge has a trick up his furry sleeve.   He sails through the trees then hops over the pergola, onto the roof, over and down, finally leaving the chase.  I’ve never quite seen such hops as his in full run.  Think of Mighty Mouse, legs fully extended forward, head tucked.  Yep, that be Rouge in flight.
I’ve noticed he’s not around as much these days though when he is, he is not alone.  Me thinks Rouge will be nice and toasty warm this winter cuddled up with Mme Petit Rouge in one of their nests and just maybe I’ll hear the pittie pat of real baby squirrels on the roof in spring.
Posted by cheryl at Friday, September 13, 2013