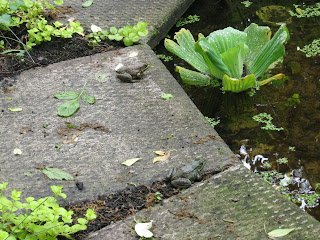 As a Canadian tis a well known fact that we love to talk about weather but I won’t. Okies just for a minute but it’s a good lead in to the story. Last night I had the furnace on, not a fun thing to do towards the end of May but I had a chill. I held out as long as I could but the dampness and cold creaked me bones.

This morn I awoke to fog and drizzle. Now we know there has to be warmth with fog, that harbinger of heat and humidity so the day began as foggy and soggy. Stay with me.

With tea in hand I stepped outside to check The Pond. I tend to do that in the morn if only to see if new residents have arrived. To my surprise there was one! Woooooo hoooooo I shouted. There he was, a most bootiful green frog sitting comfortably on the far side. I wondered if this was the same one who flipped me a finger ( do frogs have fingers? ) as I strode off to work Tuesday morn after a long weekend and not seeing one. His flip was more of a “Hasta Vista baby, have fun at work while I frolic in The Pond”. I hate that kind of flip.

Brushing aside a few branches I spied another one ! Woooooo hoooooooo, two at the same time ! I was tickled pink or is that freckled, hhmmm.

These two have sat on opposite sides for most of the day. Sitting proudly and staring at each other. Though when one watches them long enough you pick up a subtle fluttering of the eyelids since they don’t have eyelashes. After a few hours I noticed the larger one had hopped over to the far side sitting close but not touching the smaller one. Could this be the beginning of froglettes? She may be playing hard to get but knowing male frogs he will succeed in making her his own.

In their honour and from this day forward they shall be named Fog and Sog. How will I know the difference? I won’t but they will. ;)
Posted by cheryl at Saturday, May 28, 2011